Altogether 282 original papers were published in scientific journals and presented at both national and international congresses and seminars. Some highlights of the publications – reflecting the diversity of our research – are summarized in this annual report.

Although the Covid-19 pandemic affected research in many different ways in 2021, operations at the Research Center continued to be active and productive.

In 2021, the Research Center's management decided on several changes. Associate Professor Päivi Saavalainen was appointed as a new group leader in the genetics research program. Saavalainen's main research interests are in celiac disease and inflammatory bowel disease, which are explored through modern multi-omic methods. Doctor Marco Savarese was granted the status of young group leader after receiving a five-year academic research position from the Academy of Finland, with the option to be promoted to group leader after the academic research period ends. Savareses' research interests lie in hereditary muscle diseases. Associate Professor Jukka Kallijärvi was granted group leader status. Kallijärvi takes over the leadership of the group that researches neonatal mitochondrial diseases after Vineta Fellman.

A decision was made to move the Fin-HIT project, led by Associate Professor Heli Viljakainen, from the genetics program to the program for public health research program from the budget year 2022. Furthermore, the Executive Board decided to continue the five-year social gerontological research project launched in 2017 and increase its support. Associate Professor Mikaela von Bonsdorff, who has led the social gerontological research in Johan Eriksson's group, was granted group leader status. The Executive Board also decided to cease the activities of Professor Tomi Mikkola's group at the Research Center, as the group's research focus is rather distant from the Folkhälsan’s strategic areas.

In 2021, an ethics review board for the humanities was established for the Folkhälsan Research Center. The chairman of the committee is Kristian Wahlbeck, a member of the Folkhälsan Foundation’s board. Senior researcher Outi Elomaa, who also acts as an expert and advisor in matters concerning data protection and agreements at the Research Center, acts as the committee's secretary and rapporteur.

The work to increase the visibility of the Research Center continued with Simon Granroth as the Center's Science Communicator. Several updates and modernizations were made on the research websites. About 10% of all scientific articles from the center were also published as popular science articles. During the year, the Research Center's visibility increased in all active social media channels. Our research was also included in the podcast Hallå Folkhälsan, which was produced in collaboration with the Folkhälsan communications department. The Center organized its third Swedish-language Studia Generalia lecture online in April, on genetic research in epilepsy and in diabetic kidney disease.

The research groups published 301 articles, of which 282 were original publications in scientific journals (link to list of publications). Seven doctoral students from the program for genetic research and three from the program for public health research defended their doctoral dissertations at the University of Helsinki. Eleven master's thesis and four thesis for the licentiate degree in medicine were also completed at the Research Center during the year. Some highlights of our publications – reflecting the diversity of our research – are summarized in this annual report (link to highlights).

The total funding for 2021 was EUR 8.87 million, of which 45% came from the Folkhälsan Research Foundation and 15% from Folkhälsan Foundation funds. External funding accounted for 40% of the total financing. 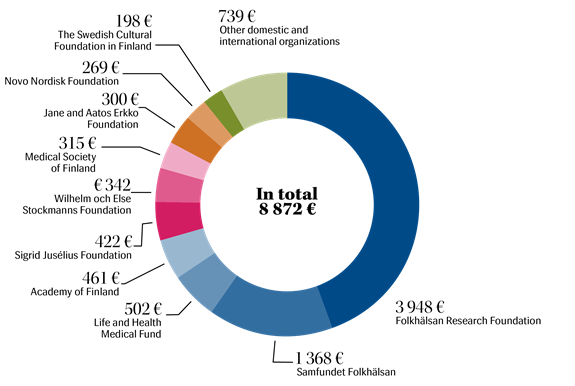 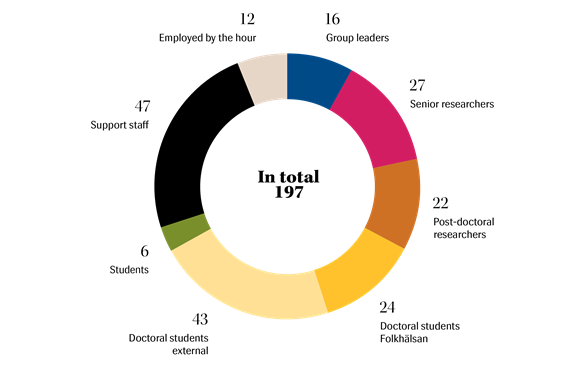 The research center has also invested in its visibility outside the scientific community. This is done through popular science articles about our research and popularization of our research in various multimedia formats. Our key performance indicators for visibility increased significantly during 2021. 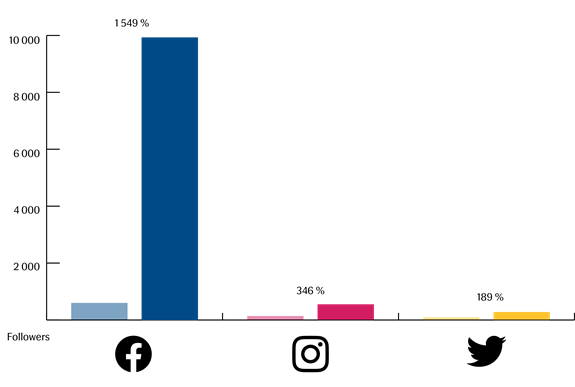