”I drilled two holes in both of my shoes” - Folkhälsan

”I drilled two holes in both of my shoes”

Close to 250 people navigated the rocks and stumps on running trails and swam in the lakes of the Nuuksio National park as they competed in Folkhälsan Swimrun last Saturday. “I drilled two holes in both of my shoes. That way, water drains out when you start running after a swimming stage, says Ann Tylemo, who participated in the first start of the day.

Ann Tylemo participated in Folkhälsan Swimrun for the first time. She was happy with her performance.

For some of the participants it was the first time, while others were more experienced. The majority of them wore smiles on their faces after the competition.

Close to 250 people navigated rocks and stumps on running trails and swam in the lakes of the Nuuksio National park as they competed in the Folkhälsan Swimrun event last Saturday.

Last Saturday, the seventh Folkhälsan Swimrun was organised in Solvalla. In the competition, participants run and swim – either solo or with one team mate – in the beautiful nature of the Nuuksio National Park.

According to Race Director Mats Almqvist, the number of participants in 2020 remained more or less unchanged from the previous year:

“There were more participants from Finland, but because of the coronavirus situation we had fewer international participants this year.” 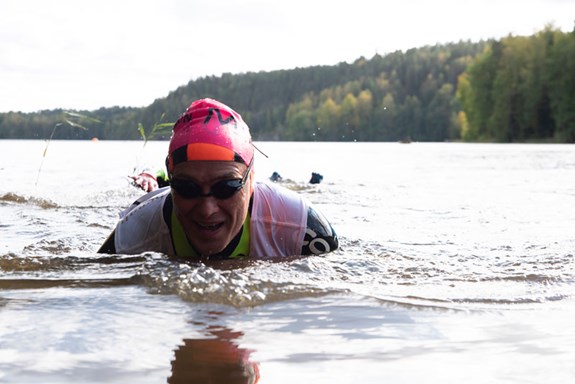 Some 240 individuals participated in this year’s competition. Almqvist is delighted that there are more and more young contestants on various race distances.

“In the first years, the contestants were mainly middle-aged men. Now the gender distribution is close to 50/50 and we have a significantly higher number of young contestants. We are very happy for that”, Almqvist says.

In Folkhälsan Swimrun, the participants can choose from four different race distances. Ann Tylemo participated in the first start of the day, the Super Sprint race, which covers a total of seven kilometres of running and one kilometre of swimming.

For Tylemo, whose roots are in Åland but who now lives in Espoo, this year was the first time participating in Folkhälsan Swimrun.

“That’s why I chose the short race”, she says after passing the finish line.

She was happy that she completed the race and admits that there were some new challenges.

“I am used to running in the woods, so the running part went well. The swimming technique was the greatest challenge. I swam breaststroke while others swam freestyle, so some participants passed me during swimming stages.” 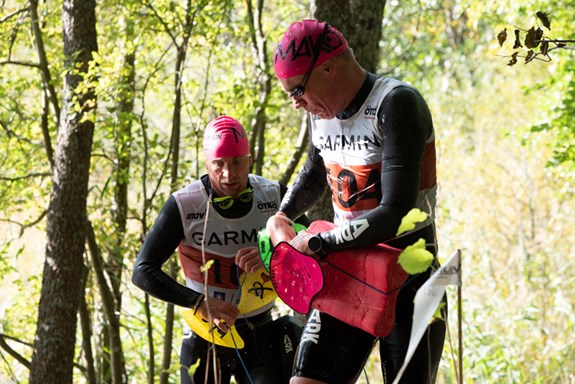 To combine running and swimming in the most effective way, some special equipment is needed. The competitors wear their shoes both on land and in water. Ann Tylemo shares a tip about running shoes:

“I drilled two holes in both of my shoes. That way, water drains out when you start running after a swimming stage”, she explains.

She also has a swimrun-specific wetsuit.

“This suit offers greater freedom of motion than a regular wetsuit.”

Tylemo had her tactics for the race clear before the start, and she feel she succeeded in following them:

“I tried to be as fast as possible in the forest, because that is my strong suit. My swimming still leaves a lot of room for improvement, but even that part got easier as the race progressed.”

Overall, Tylemo is very happy with her performance:

“I will certainly do this again. I prefer open water swimming to swimming in an indoor pool.” 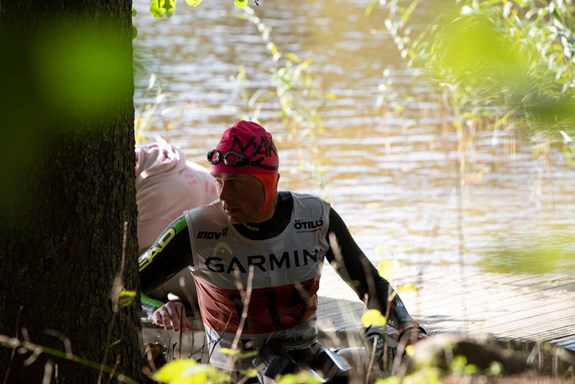 Didn’t she get cold in the water?

“It does get a bit chilly, but running restores warmth to the body quite quickly. It was nice to be able to run for a bit before the next swimming stage.”

Tylemo is also happy that she started with the shortest race distance.

“It was a good decision. I think I can up the stakes a bit next year with a longer race”, she laughs.

The longest race distance, the ÖtillÖ Merit race, includes a total of 33 kilometres of running and 5.8 kilometres of swimming. This year’s winners were the team of Tero Setola and Mikko Laine. This was their first swimrun competition, but both of them have strong triathlete backgrounds.

“It was really fun, but also hard. The cold water in particular made this a challenge”, Mikko Laine says. 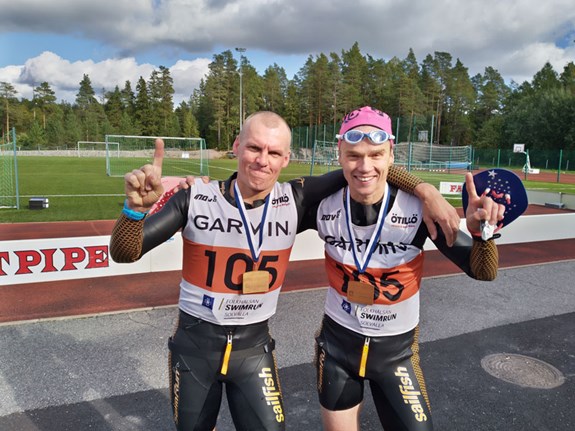 Laine’s team mate Tero Setola liked the race concept:
“Really good work by the organizers. It was great to run in the woods and dive into the lakes.”

He agrees with Laine about the race being a challenge:
“You can’t really compare this to triathlon where you’re racing at a steady pace. Here the pace is constantly changing and you’re getting cold in the water and hot while you’re running. In the last ascent, Mikko had to pull me”, Setola laughs.

Photographs by Prakticum media students (in cooperation with Folkhälsan).

More photographs from the Folkhälsan Swimrun competition will be published at a later date.