Have You Ever Wondered Why We Need to Breathe? - Folkhälsan

Have You Ever Wondered Why We Need to Breathe?

Mitochondrial diseases are the most common group of metabolic diseases caused by genetic mutations that affect the function of mitochondrial proteins. These diseases give rise to several very different kinds of pathologies which are still incurable. Daniele Bonesso, one of our visiting PhD researchers, is testing whether a certain class of molecules could be helpful against some of these mitochondrial diseases.

Have you ever wondered why we need to breathe? Well, we breathe to because we need oxygen, and to get rid of waste products such as carbon dioxide. But why do we need oxygen to begin with? Part of the answer lies within the mitochondria in our cells, which are tasked with producing most of the energy needed for all active cellular functions in our bodies. Indeed, mitochondria are the power plant of eukaryotic cells, which would encompass the cells of all animals, plants, algae, and yeasts on this planet.

Mitochondria are organelles, basically the name for a specific unit that has specialized functions within the cell. The mitochondria contain, among some thousands of proteins, four large protein complexes which form the respiratory chain system, structures that accept electrons coming from the food we eat, such us glucose or fatty acids. The mitochondrial respiratory chain couples the flow of these electrons to the production of adenosine triphosphate, ATP, which is the molecule used to store energy in our cells. The last acceptor in this chain is molecular oxygen, and thus, inside the mitochondria the oxygen we breathe is consumed and converted into a water molecule.

This process is known as oxidative phosphorylation, and for this process, we continually need oxygen to produce the energy we need. The critical point is that handling molecular oxygen is not straightforward, because oxygen loves electrons, and the cells need mitochondria to finely control the flux of electrons that otherwise may generate toxic compounds if unintentionally combined with oxygen. 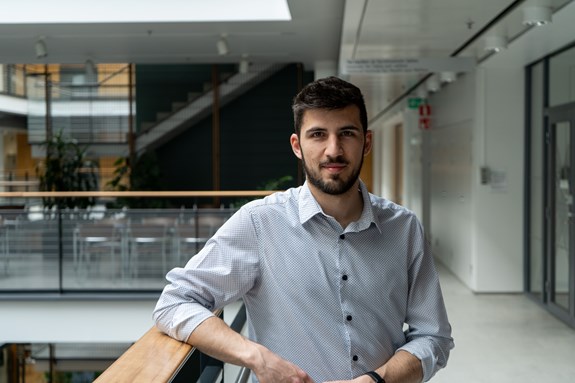 Daniele Bonesso, PhD student and visiting researcher at the FHRC.

Daniele Bonesso is a PhD researcher, visiting the Folkhälsan Research Center, FHRC, to study the mitochondrial respiratory chain in the context of mitochondrial diseases where the third complex, CIII, is dysfunctional.

– Imagine a supply chain for gold, working mainly through a railway system with four railway stations. The gold starts its trip from the first or the second, and third stations, and reaches the final one where it can be sold. If one of the stations is not working properly, you can image the chaos that the supply chain may face. I am currently studying diseases where the third railway station is not working properly. This is the third of the four huge protein complexes, and it transfers electrons coming from the first and second complex to the last complex, Bonesso explains.

– Consequently, the third station is a central component of our railway system. The story gets even more complicated, since there are many other small railways that must supply the third station with other gold cargoes. The gold represents the electrons that are obtained from the food and that are fundamental to produce the energy that will keep us alive. The train stations are the respiratory chain complexes and they secure the electron transfer to the oxygen, continues Bonesso.

Following the same train of thought, if the mitochondria are dysfunctional the consequences can be catastrophic. Many diseases with mitochondria dysfunction are hereditary and can show up even in the early childhood. But how could we, hypothetically, repair one of these train stations if needed?

– Well, there are basically two ways to fix the problem. You can deliver new instructions to build the railway. This would be accomplished by gene therapy that delivers a functional gene bearing the information able to restore mitochondrial function. Or, you can create an alternative rail without the need of gene therapy that circumvents the third train station and allows the gold to be transported to the final station. The second option is what I am currently studying to understand whether it could be a novel solution, says Bonesso.

Our work is full of challenges since we are studying extremely complicated processes that have to be unravelled little by little.

In his previous research in Padua, Italy, Bonesso’s supervisor, professor Ildikò Szabò, proposed a novel and intriguing project to study the effect of a class of molecules that can be exploited to treat the mitochondrial diseases. Bonesso and his colleagues found that a molecule called pyocyanin can transfer electrons around CIII in a cyclic manner, as shuttle moving back and forth continuously. Now, he is focusing on understanding the effects of pyocyanin through preclinical mouse models with a dysfunctional CIII.

– The main result I’ve obtained so far is positive, because the molecule increases the distance that sick mice can run during a treadmill exercise test. Sick mice do not run as much as normal mice, because this mitochondrial disease impairs their running performance and their muscles are weak. However, if you inject this molecule into the sick mice, their condition improves, says Bonesso.

Bonesso started his journey at the FHRC under the supervision of Professor Vineta Fellman and docent Jukka Kallijärvi. According to Bonesso, both have almost encyclopedic experience in the field of mitochondrial diseases and have studied CIII dysfunction extensively. The main interest of their research is the GRACILE-syndrome, the most common disease caused by mitochondrial CIII dysfunction. A condition which is disproportionally frequent in the Finnish population.

– Our collaboration aims to test whether pyocyanin can be helpful in a disease model, to strengthen the results that I found in Padua. We are still working on this project, but I am confident that something encouraging will be uncovered, says Bonesso.

– We must stay positive. Our work is full of challenges since we are studying extremely complicated processes that have to be unravelled little by little to try to see where we can intervene to ameliorate the disease. Scientific research is infinite and evolves step-by-step, Bonesso ponders.

I believe that, even if these diseases are rare, it is worth trying to cure them because our experiments are sometimes unpredictable and may give knowledge applicable to other fields and help people in unforseen ways.

There is no Second-Class Research

Bonesso’s dream would be to help people in the real world. According to Bonesso, the ultimate goal for researchers should be to expand the humankind knowledge in such a way that the information can be utilized to save lives, but also to build a better world in which to live.

– I believe that, even if these diseases are rare, it is worth trying to cure them because our experiments are sometimes unpredictable. This means that we may end up with knowledge that is applicable in other research fields and possibly helps other people in unforseen ways. There is no rank B research, says Bonesso.