Altogether 239 original papers were published in scientific journals and presented at both national and international congresses and seminars. Some highlights of the publications – reflecting the diversity of our research – are summarized in this annual report.

Due to the Covid-19 pandemic, the year 2020 turned out all over the world to be very different from what was expected in the beginning of the year. The Research Center was not an exception. In the middle of March 2020, the majority of the personnel were forced to telecommute with only the most critical laboratory activities allowed to continue on site in the Research Center. Planned fieldwork in several research projects had to be postponed. Summer and early autumn brought some flexibility for experimental work, but towards the end of the year, stricter guidelines for telecommuting became necessary again.

During 2020, the Board of the Research Center appointed docent Joni Turunen, an ophthalmologist at the Helsinki University Hospital, Group Leader in the Genetics Research Program. For several years, Joni has acted project leader within the Center, building up his own line of research on genetic eye disorders. He was undoubtedly competent to become an independent leader of his small but dynamic group.

To further strengthen the visibility of research activities within Folkhälsan, a Science Communicator, Simon Granroth was hired to the Center in March. He worked determined to increasing our visibility, especially in social media and in Folkhälsan publications aimed at a wide audience.

In December, we received the sad news of Professor, Academician of Science Albert de la Chapelle having passed away (link to article). Albert was not only an internationally recognized pioneer in the field of human genetics, but importantly, a founding member of the Folkhälsan Institute of Genetics, which he directed until 2003. He was a visionary leader without whom we would not have the strong Genetics Research Program we have today. For many of us who work at the Center today, Albert was also the scientific supervisor and mentor – inspiring and demanding, but simultaneously fair and warm-hearted. We remember him fondly and with gratitude.

The Research Center’s close collaboration in research and teaching with the University of Helsinki continued. Several groups affiliated with the Center are also associated with research programs of the Faculty of Medicine: Prof. Per-Henrik Groop, Prof. Outi Mäkitie and Docent Tiinamaija Tuomi – Clinical and Molecular Metabolism (CAMM) Research Program; and Prof. Juha Kere and Docent Jukka Kallijärvi – Stem Cells and Metabolism (STEMM) Research Program. Furthermore, Prof. Anna-Elina Lehesjoki and Prof. Hannes Lohi work as HiLIFE Fellows at the Helsinki Institute of Life Science (HiLIFE) at the University of Helsinki in 2017–2020.

Despite the year being tough and challenging for the personnel in many ways, the groups managed to be very productive. Altogether 246 original papers (link to list of publications) were published in scientific journals, slightly exceeding the number of 2019. Some highlights of the publications – reflecting the diversity of our research – are summarized in this annual report (link to highlights).

The groups continued to be successful in getting external funding for their research. The total funding for 2020 was 8.9 million euros, of which 43 % came from the Folkhälsan Research Foundation and 11 % was from the Samfundet Folkhälsan funds. External financing accounted for 46 %. 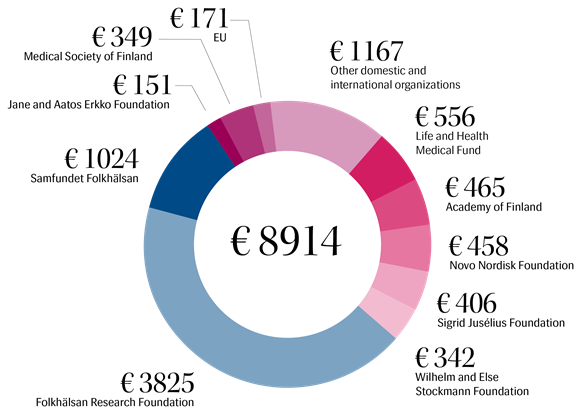